Attention! Site is in translation process

Recently it was learnt that on April 27, at the meeting of the eighth session of the House of Representatives of the National Assembly of the seventh convocation, the deputies adopted several bills at once in the second reading.

The draft law “On amendments to the Criminal Code of the Republic of Belarus” was adopted in two readings. 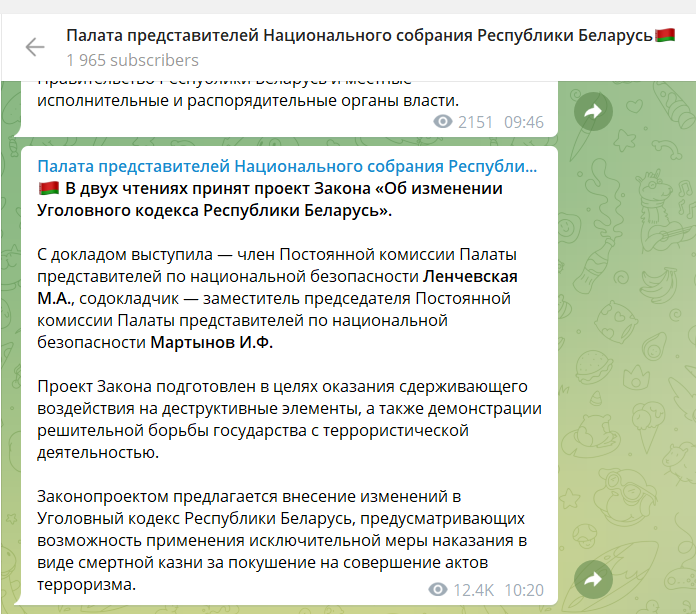 The draft law has been prepared to have a deterrent effect on destructive elements, as well as to demonstrate the state's resolute struggle against terrorist activities.

The bill proposes amendments to the Criminal Code of the Republic of Belarus, making it possible to apply an exceptional measure of punishment in the form of the death penalty for attempted acts of terrorism.

Apparently, in the situation of the legal collapse that occurred in August 2020, and the progressively increasing level of repression, the growing number of political prisoners and acts of open terror by the security forces of Belarus, it is impossible to talk about the legal need to increase the powers of employees of the Ministry of Internal Affairs. 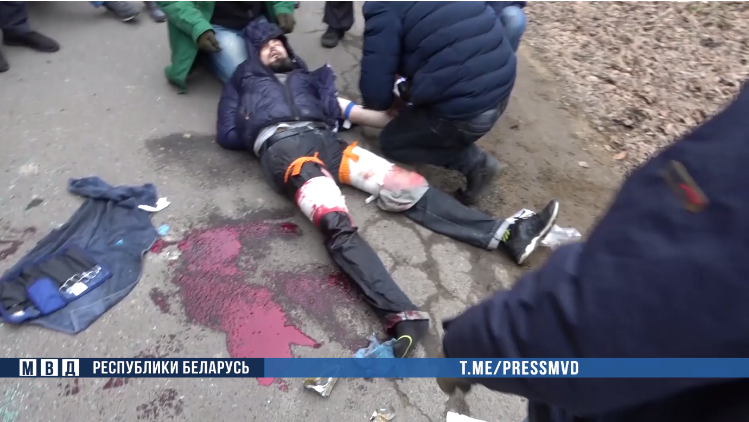 Video of a detention published on the official channel of the Ministry of Internal Affairs on April 6, 2022

The only reason for such state initiatives is an attempt to expand the practices of suppression and intimidation of the country's population, including further attacks on basic human rights, enshrined in the Universal Declaration of Human Rights of December 10, 1948, adopted by the UN General Assembly.

In particular, the violation of Article 3 of the above-mentioned document, which guarantees the right to life, liberty, and personal integrity of citizens. Article 5, where every citizen is guaranteed freedom from torture and inhuman treatment. Article 9, which guarantees freedom from frivolous arrest or detention, and several other basic and inalienable human rights.

The death penalty contradicts the same document, which indicates the INALIENABLE rights of a person inherent by birthright. Absolutely inhuman in its essence, the practice of applying such punishment speaks of the complete political engagement of both the legislative and executive branches of the country's government, serving the will of the dictatorial system.

The monstrous attempt to expand the possibilities of applying such punishment in a situation of complete dependence of the judicial system of Belarus on the current government, the lack of access for citizens to human rights structures, legal assistance and an honest, unbiased court is another outrageous violation of human rights. This initiative of legislators subordinate to the Lukashenka regime is nothing more than a way to systematize intimidation and terror against the citizens of Belarus, another way to legalize crackdowns on undesirable political and civil activists, or simply against those who disagree.

The interpretation of “terrorism” term in the Republic of Belarus today has an extremely wide, even speculative form from a legal point of view, which can lead to a wider spread of capital punishment.

It should also be noted that both adopted bills blatantly violate the Covenant on Civil and Political Rights, adopted by a resolution of the UN General Assembly on December 16, 1966. This international document is identical to the Universal Declaration of Human Rights and has several comments and clarifications.

The Republic of Belarus is a party to the Pact, which was ratified on the territory of our country by a decree of the Presidium of the Supreme Soviet of the USSR on September 18, 1973. Effective on March 23, 1976.

As of May 31, 1996, 133 states participated in the Pact, including Armenia, Azerbaijan, Georgia, Belarus, Lithuania, Latvia, Russia, Moldova, Estonia, and others.

We, a coalition of human rights organizations, initiatives of solidarity and assistance to political prisoners, independent activists, and diasporas of Belarus around the world, declare that both legislative initiatives are repressive in nature and aim to systematize terror against the citizens of the Republic of Belarus.

We call on the international community and all people of good will to pay attention to the situation of the legal collapse in the Republic of Belarus, condemn such practices applied to the citizens of the country and provide feasible assistance to the victims of political persecution, as well as initiatives and organizations that are helping the repressed!